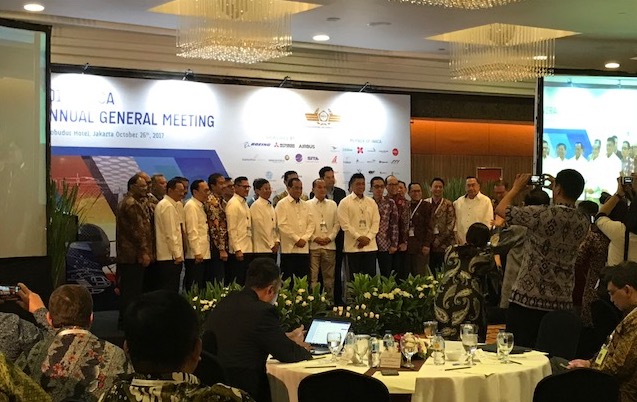 At the Indonesian Air Carriers’ Association (INACA) annual general meeting in Jakarta (October 26) officials from the association highlighted that airline fares are regulated by the government – there are caps on how high fares can be increased – but the fees that airports charge go unregulated.

“The airport fees are too high. The airports don’t want to reduce their fees, because they are working in silos,” one INACA official told the audience.

INACA officials say airport revenues have increased substantially over the years, thanks to increasing passenger traffic. They say airports should share some of the good fortune by not imposing higher fees on airlines. But despite having higher revenues, airport fees continue to increase, they add.

Airfast managing director, Arif Wibowo, says airlines compete in a highly competitive market, but when they deal with airports, they face “a monopolistic situation”.

He says aviation is important for driving economic growth, but the aviation industry has yet to reach its full economic potential in Indonesia due, in part, to poor airport infrastructure.

Arif says the aviation sector accounts for 3.5 percent of the world’s gross domestic product, but in Indonesia it only accounts for 2.7 percent.

Angkasa Pura I president director, Danang, Baskoro, told the audience that airports account for less than 5 percent of airline costs. The big expenses are fuel and aircraft leases, he says. Angkasa Pura I and II are state-owned companies that operate nearly all the airports in Indonesia.

Danang says some airport fees and charges are not imposed on the airlines per se, but rather on the passengers who pay via the airlines.

A Need for Better Airport Infrastructure
Besides increasing airport fees and charges, INACA officials also highlighted how inadequate airport infrastructure has meant that many major airports in Indonesia are now subject to slot constraints.

Wismana Adi Suryabrata, deputy of facilities and infrastructure at the National Development Planning Agency, says the government is working to improve transport infrastructure, but it has budgeted to contribute 40 percent, so the remaining funding for airport development will have to come from the private sector.

Wismana says the government values aviation because it supports the three key sectors it is targeting to drive economic growth: agriculture, industry and tourism.

He says the government has also identified tourist destinations it wants to develop, so airport development and airline connectivity will be key.

A Call for Better Alignment Between Key Stakeholders
INACA officials say there needs to be more dialogue between airports, airlines and government regulators. One INACA official said to the audience- while asking a question to the panel – if there continues to be a lack of dialogue between industry stakeholders, the government will have difficulties achieving its economic goals.