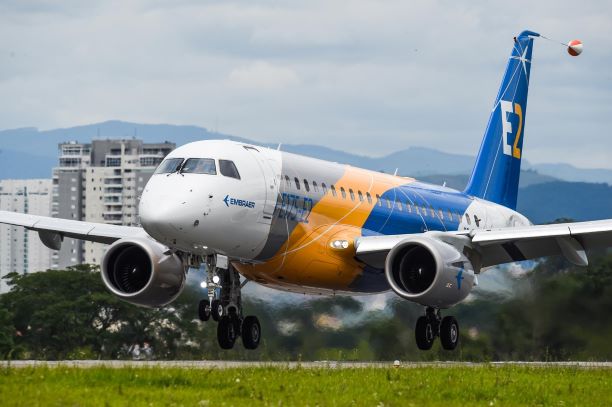 Regional aircraft manufacturers are pausing assembly lines worldwide, citing the need to contain the virus spread on their premises as well as in response to the sudden downturn in the airline industry.

Airlines around the world have been grounding aircraft, in some cases their entire aircraft fleet, in response to sharp falls in passenger demand and government bans on air travel.

Governments are restricting air travel in an effort to contain the coronavirus. Some developing countries – such as Papua New Guinea, Nepal and Bangladesh – have banned domestic air travel completely.

Embraer says it has placed its employees in Brazil, who cannot perform their jobs remotely, on temporary paid leave.

Bombardier says it has paused production on CRJ regional jets. The aircraft are manufactured in Quebec, Canada, where the provincial government has ordered a month-long suspension, of non-essential services, that ends 26 April. The Canadian manufacturer had earlier said it would complete its last few CRJ deliveries mid-2020. It had also earlier announced a deal, due to be completed mid-2020, to sell the programme to Mitsubishi Heavy Industries.

French-Italian regional turboprop maker ATR says in a statement that “because of the pandemic situation in France, ATR has paused production and assembly sites – Saint-Martin and Francazal (Toulouse) – in order to deploy the appropriate safety and organizational measures.

Longview Aviation Capital, the owner of the De Havilland Canada Dash 8-400 and Viking Air Twin Otter programmes, says it has temporarily suspended production of both aircraft. David Curtis, executive chairman of Longview, says, “This is a period of considerable challenge for our industry and for our customers, and we must adapt to this new – hopefully temporary – reality.”

Mitsubishi Aircraft says certification of its SpaceJet M90 regional jet is still proceeding. It announced earlier this month that Flight Test Vehicle (FTV) 10 had completed its first flight. FTV 10 is the first SpaceJet M90 in the aircraft’s final, certifiable baseline configuration, it says.