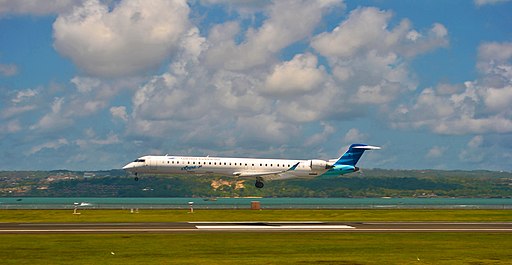 Aircraft lessor Nordic Aviation Capital (NAC) has responded to Garuda Indonesia’s announcement, that it has grounded and is returning its 12 Bombardier CRJ1000s to NAC before the leases have expired, by arguing it has received no termination notice and the national carrier needs to comply with its contractual obligations.

Indonesia’s minister of state-owned enterprises, Erik Thohir, and Garuda Indonesia president director, Irfan Setiaputra, held a virtual press conference yesterday announcing that the 12 CRJ1000s were grounded on 1 February and will be returned to NAC even though the leases were only due to expire in 2027. Garuda leases 12 CRJ1000s from NAC and owns another six.

The minister says: “There were several discussions between Garuda and NAC to show our good intention. But unfortunately, the early termination plan has not received any response from them.”

Garuda Indonesia has been losing money, and Thohir says the CRJ1000s are ill-suited to the airline’s needs.

Setiaputra says they are also speaking to Export Development Canada with regards to the six purchased CRJ1000s and how it can achieve an early settlement on those aircraft which have a contract ending in 2024.

NAC says in a statement: “Last year, in light of the global pandemic and Garuda’s difficult trading environment, NAC had extensive discussions with the airline to help their cash position during the crisis.”

“NAC has continued these discussions but there has been no agreement to date, and no termination notice has been received. The lease agreements thus remain in full force and effect, and NAC expects Garuda to continue to honour its contractual commitments.”

“While NAC is sympathetic to the commercial difficulties of Garuda, it is confident of its position and absolutely determined to protect its commercial interest,” it says.

Garuda did announce last year that it was seeking lease reductions on its CRJ1000 and ATR aircraft and if it was unable to reach an agreement, it would seek to return the aircraft early.

NAC, in its statement, also sought to distance itself from Bombardier which has become embroiled in an ongoing corruption investigation by UK and Indonesian authorities into Garuda’s decision in 2011-2012 to buy CRJ1000s.

The airline’s then-CEO, Emirsyah Satar, was sentenced last year to jail for eight years for bribery and money laundering related to the purchase of aircraft and engines from Airbus and Rolls-Royce.

Indonesian businessman, Soetikno Soedarjo, was also sentenced to six years in jail for accepting money from Rolls-Royce and several aircraft manufacturers, some of which was then given to Satar.

NAC says: “Garuda made the decision to directly acquire six CRJ1000 aircraft from Bombardier all of which Garuda has operated since 2012. These aircraft were selected by Garuda prior to any engagement with NAC.”

“Subsequently, Garuda selected NAC to provide a further twelve CRJ1000 aircraft under a lease agreement which ends in 2027.”

“For the avoidance of doubt, NAC is not party to any investigation into the selection of the aircraft by Garuda in 2012, and there has been no allegation of any wrongdoing on the part of NAC in relation to the placement of the aircraft,” it says.

Also, the airline they are in dispute with is the national carrier of Indonesia. NAC is the world’s largest lessor of regional aircraft, including turboprops. Indonesia is the largest single market in the world for turboprops. It is never good getting in a fight with a national government.