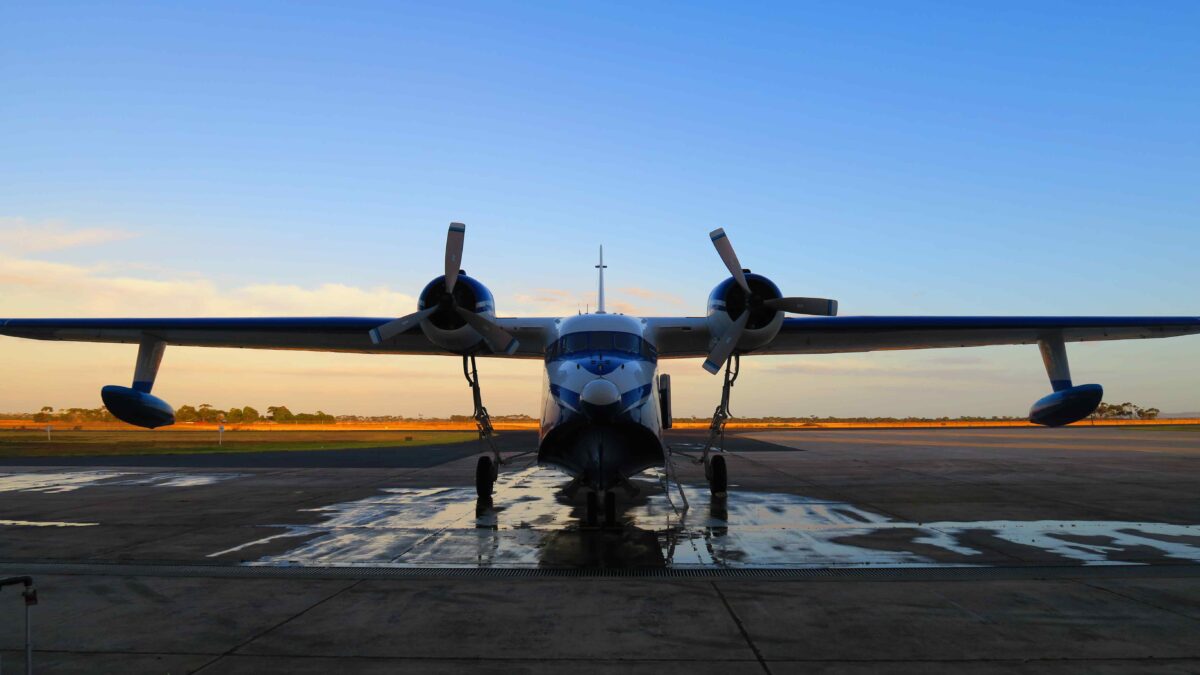 Australian company Amphibian Aerospace Industries (AAI), which owns the type certificate for the Grumman G-111 amphibious aircraft, has bought Australian aerospace design engineering firm Five Rings Aerospace and the two are working to re-engine the G-111 with Pratt & Whitney PT6 turboprops and put the aircraft type back into production.

Khoa Hoang, chairman of the Amphibian Aerospace Group of Companies, says they are reengining the aircraft with Pratt & Whitney PT6 turboprops using a supplemental type certificate (STC) they are developing under the Australia Civil Aviation Safety Agency (CASA) and US FAA regime. The latter is important so the new production aircraft, the G-111T, can be more readily sold internationally.

AAI has selected the PT6A-67F, a more powerful variant of the PT6. It has 1,700 shaft horse power and is the same variant used on the AirTractor AT-802, an aircraft that carries large payloads.

The Amphibian Aerospace Group of Companies is negotiating with an undisclosed state/territory government to confirm the place to carry out the STC and manufacture the new aircraft, says Hoang.

The company has a Grumman G-111, local registration VH-NMO and manufacturer’s serial number 148329, which will be converted to a PT6-powered aircraft and used for obtaining the STC.

VH-NMO is one of the very last G-111 manufactured, says Hoang, adding that a total of 466 Albatross seaplanes were built by Grumman Aircraft from 1947 to 1961. The Albatross includes the G-111 civil aircraft as well as the HU-16 (variants A to E) which is a military aircraft.

The G-111 and HU-16 are both powered Wright Aeronautical piston engines, but Hoang says reengining with the PT6A-67F gives the aircraft more range, power, payload capability and greater fuel efficiency.

He says they chose the PT6 because it is a proven engine platform in a maritime environment.  There are many seaplanes, such as the Viking Air DHC-6 Twin Otter, that are powered by the PT6, says Hoang.

The other reason they chose the PT6 is because the engine type is ubiquitous in the market, says Hoang, adding that it is on so many aircraft platforms – Beechcraft KingAir, Twin Otter, Cessna Caravan, Pilatus PC-12, Quest Kodiak, etc – that it means there is strong spare parts and customer support for the engine around the world.

“AAI is very happy with the support we have been receiving from Frank Nel and the team at Pratt & Whitney Canada,” says Hoang.

He says the first STC will purely be for reengining the aircraft. The only other significant modification under that STC will be upgrading the cockpit to support the new powerplants. He says it will remain largely an analogue cockpit, but there will be some digital flight instrument displays incorporated.

Hoang says they aim to receive the STC in two years from now and have the first production aircraft come off the assembly line in three to four years from now.

He says the bought Five Rings Aerospace because it gave them immediate aerospace design capability.

Five Rings Aerospace, which is led by its founder and CEO Greg Hanlon, has done previous projects such as: an airframe life-extension program for the Dornier 228-201 that it certified with CASA for Australian operator GAM Air, a bariatric stretcher leading device for the Royal Flying Doctor Service and an ATR 42-320 passenger-to-freighter cargo conversion program for Hevilift Australia.

Amphibian Aerospace Group of Companies also includes Amphibian Aircraft Maintenance, which it created by buying a general aviation maintenance company in New South Wales called Copper Sky that was already maintaining G111 aircraft. It also has Amphibian Air which it created by acquiring air operator certificate holder De Bruin Air, a charter operator based in South Australia. While Hoang is founder and chairman the Amphibian Aerospace Group of Companies, the CEO of AAI is Dan Webster the former managing director of the Australian arm of Elbit Systems.

Hoang says the G-111 may have first been developed in the late 1940s, but an upgraded version of the aircraft has a valuable role to play in the current aviation landscape because it has unique capabilities.

“It is the only FAA-certified transport category seaplane that can carry 28 passengers,” says Hoang.

“Many of the planes operating today are not really seaplanes, they are float planes, which means they can only cope with waves that are 30-40cm high,” says Hoang, adding that the G-111T is certified for and has proven capability take off and land in 1.37m-high waves.

He also says most float planes have no toilet, “which really limits – in practical terms – the flight time which you would have to keep within 45mins.”

Hoang says he was inspired to develop a seaplane program after attending a conference in Singapore which discussed humanitarian assistance and the need for a platform to rescue refugees at sea in the Mediterranean.

He says he realised there was a need for an amphibious aircraft that could do search and rescue out at sea and also deliver aid shipments onshore.

“There’s countries such as India and those in Southeast Asia, Africa, South America and parts of northeast Asia where the economy has developed. People are no longer poor in many of these places – so they can afford to fly – but the infrastructure has failed to keep up, so they need an amphibious aircraft,” says Hoang.