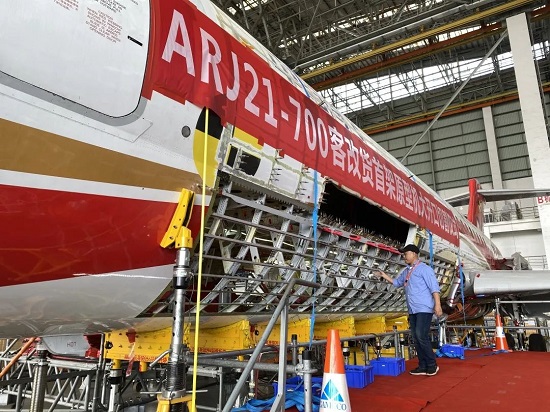 YTO Cargo Airlines says in a statement that it and COMAC recently held a ceremony in GAMECO’s hangar to promote the launch of the first ARJ21 passenger-to freighter-conversion program.

The airline says it is fulfilling its promise of supporting domestically-produced cargo aircraft and will be the global launch operator of the ARJ21 freighter.

“As the aviation passenger market continues to be greatly impacted, cargo operations have been accentuated, in terms of its contributions in supplying pandemic resources and its involvement in the rebuilding supply chain. This passenger-to-freighter conversion project came at an opportune [time],” it adds.

Su Xiu Feng, YTO Express Group deputy director and YTO Cargo Airlines director, says the ARJ21 passenger-to-freighter conversion program is a significant milestone in the history of China’s domestically-produced aircraft, and signifies the cooperation between the airline and COMAC.

“We firmly believe that cross border e-commerce and the global supply chain market will provide a broad stage for us to further our cooperation with COMAC,” he asserts.

Su also thanked GAMECO for its professional capabilities and commended its extraordinary abilities to capture this opportunity in the passenger-to-freighter conversion market.

According to Airfleets.net ARJ21-700s with manufacturer’s serial numbers (MSN) 109 and 112 have been assigned to YTO Cargo Airlines. Comac’s MSNs for ARJ21 program start at 100, so MSN 109 and MSN 112 are some of the very first ARJ21s manufactured. Both aircraft first flew in early 2018, it adds.

Picture from YTO Cargo Airlines shows work on the wide cargo door of the ARJ21.