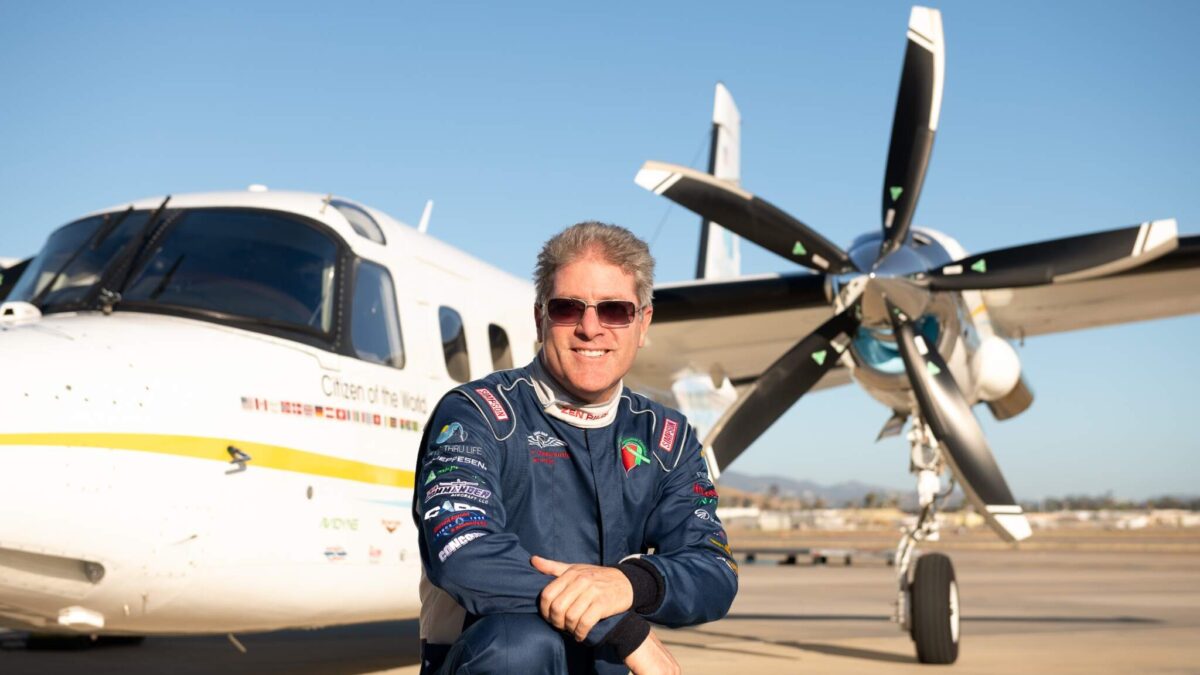 Circumnavigating the planet and flying around the South Pole in a small turboprop aircraft, with a 50% chance of survival, is something most people would never consider.

“I felt I had a 50% of chance of being alive in the next 24hrs,” US aviator Robert DeLaurentis says when describing how he felt departing from Argentina’s Tierra de Fuego, the southern most tip of South America, on his non-stop round-trip flight to the South Pole.

He says considering all the risk factors – fuel gelling, the vast distance, aircraft weight, loss of navigation equipment when close to the pole, pilot fatigue, “and all the things you can’t predict, I feel I was very fortunate [to have survived].”

There are several reasons he decided to circumnavigate the planet and fly around the North and South Pole, DeLaurentis tells Smart Aviation APAC.

“A lot of people say a lot of things, but they don’t deliver. I wanted to go out into the world and do something positive …and show people that impossible things, can be done when we work together,” says DeLaurentis.

“It was [also] one of the most challenging things I thought we could do with an aircraft and it would push us to the limit. And it’s during those times [when you face immense challenges] that you learn so much about yourself and the world. [Therefore] I had my own [personal] reasons for doing it as well.”

He says the other reason for embarking on the mission was to showcase aviation safety and technology.

DeLaurentis successfully flew from Argentina to the South Pole and back on the 16-17 December 2019, making him the first person to fly that mission non-stop using a turboprop-powered aircraft.

His aircraft was a modified Turbo Commander 900 powered by two Honeywell TPE331-10T engines. The aircraft normally has 2,000nm range but thanks to aircraft modifications – including six additional fuel tanks – the range was extended so the aircraft could complete the 18.1hr 4,200nm range return flight from Tierra de Fuego to the South Pole.

“I landed back with a little extra fuel, but not much,” says DeLaurentis.

“The aircraft was very heavy and slow on the outbound leg, so you need to burn more than half your fuel to get there. Then you get to that bingo point [the South Pole] then you just pray the weather is correct and you can get back,” he says.

The flight over Antarctica used biofuel, which is better than kerosene fuels. “The JetA1 we were using gels at -47 degrees Celsius,” but biofuels only gel at -49 to -50 degrees Celsius, says DeLaurentis.

He says they also chose biofuels because they wanted to showcase new technologies.

“Because it had never been done before and biofuel seemed to be the next step in aircraft propulsion.”

“If we had electric propulsion available to us, we would have used that. But the technology is not just there yet,” says DeLaurentis, whose circumnavigation around the planet was promoted using the slogan: “One planet, one people, one aircraft.”

DeLaurentis, who is based in San Diego, modified his aircraft in the US with help from sponsors and also did test flights in the Mojave Desert.

He says he spoke to one of the engineers from Gulfstream who had worked on the Turbo Commander 900 aircraft program, “and had done a feasibility study on the wing.”

“He told me how much fuel could be carried without overly stressing the wing.” Gulfstream owned the Commander aircraft program and later sold in 1989. DeLaurentis’ aircraft was built in 1983.

He says he also spoke to Robert Morgan who was director of research and new product development at Scaled Composites. Morgan has also worked on the Voyager program, the first aircraft to fly around the world without stopping or refueling.