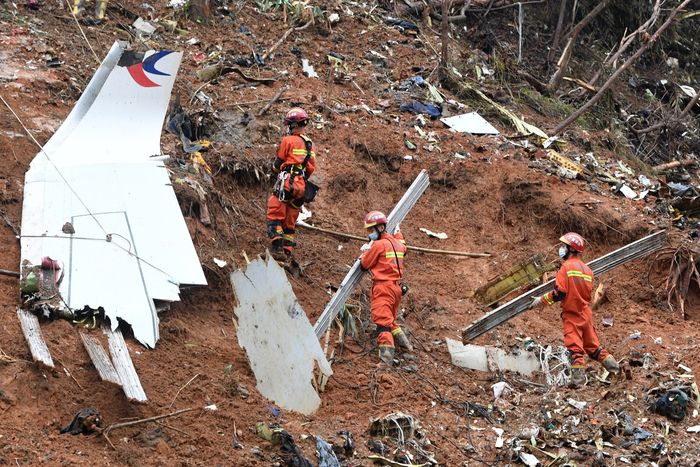 Flight data from China Eastern Airlines’ fatal air accident in March, that killed all 132 on board, suggests someone in the cockpit intentionally crashed the Boeing 737-800 aircraft by putting it into a nose.

Data from the flight data recorder (FDR) recovered from the crash suggests inputs to the aircraft’s controls pushed the 737-800 into the fatal dive, The Wall Street Journal (WSJ) reports, citing its sources familiar with the US officials’ preliminary assessment of the accident. The Chinese authorities are leading the investigation, but because a US-made aircraft was involved the US authorities are carrying-out their own investigation. The US authorities reportedly have access to the data from the FDR but do not have access to all the information available to the Chinese investigators.

“The plane did what it was told to do by someone in the cockpit,” says a source told WSJ who is familiar with the US officials’ preliminary assessment of the accident, which includes an analysis of information extracted from the aircraft’s damaged FDR.

The China Eastern Airlines 737-800 was enroute from Kunming to Guangzhou on 21 March when it pitched into a near-vertical descent, plummeting into a mountain at extreme speed, killing all 132 passengers and crew.

The information gathered so far in the probe has led US officials involved in the investigation to turn their attention to the actions of a pilot, though it is possible someone else on the aircraft could have entered the cockpit and caused the crash, the report says, quoting people familiar with the matter.

China Eastern says in a statement no evidence has emerged that could determine whether or not there were any problems with the aircraft involved in the accident. The airline repeats its statement from March that the pilots’ health and family circumstances was good, and adds that their financial status was also in good shape.

China Eastern says a cockpit intrusion scenario was implausible, citing information from a previous news conference in which Chinese authorities said no emergency code had been sent from the aircraft before the crash.

The airline says it was not responsible for the accident investigation and referred to official announcements, including the Chinese government’s summary of its preliminary report released on 20 April. The summary said that data restoration and analysis of the damaged flight data recorder and cockpit voice recorder is still progressing, the report adds.

“Any unofficial speculation may interfere with the accident investigation and affect the real progress of the global air transport industry,” the airline adds.

Chinese authorities have not flagged any mechanical or flight-control problems with the aircraft involved in the accident. China has a large fleet of 737-800s that continue to operate

Neither Boeing nor air-safety regulators have been working on any service bulletins or safety directives stemming from the crash, the WSJ report says, citing people familiar with the matter.

Smart Aviation Asia Pacific previously reported that China Eastern had temporarily grounded all its Boeing 737-800s from 22 March as a precaution.

China Eastern began returning its 737-800s to passenger service about a month after the accident, the WSJ report says. The airline also said it is continuing to inspect aircraft that were manufactured around the same time as the plane involved in the crash.

The Civil Aviation Administration of China (CAAC) has not commented on any potential causes of the crash though it said last month investigators continued to probe the accident. The CAAC has said it would make any significant developments in the investigation public in a timely fashion, but some industry commentators are skrptical.

It often takes more than a year for safety investigators to issue their final report and there have been instances in the past – such as the 737 SilkAir crash in Indonesia in 1997 – where the national investigating body and the US National Transport Safety Board (NTSB) have disagreed on the likely cause of an accident.

In the case of the SilkAir crash, the cause of the crash was inconclusive, but the Indonesian authorities said the crash may have been caused by an aircraft mechanical failure, while the NTSB pointed to pilot suicide as a likely cause.

If the China Eastern crash is found to have been caused by a deliberate act, then it is no longer deemed to be an accident per se and that means there are certain legal implications for those who are found to be responsible.

Picture from LU BOAN/XINHUA/ZUMA PRESS shows the wreckage after the accident.